Some people are more vulnerable than others to pesticide impacts. For example, infants and young children are known to be more susceptible than adults to the toxic effects of pesticides. Farm workers and pesticide applicators are also more vulnerable because they receive greater exposures.

Immediate health effects from pesticide exposure includes irritation of the nose, throat, and skin causing burning, stinging and itching as well as rashes and blisters. Nausea, dizziness and diarrhea are also common. People with asthma may have very severe reactions to some pesticides, particularly pyrethrin/pyrethroid, organophosphate and carbamate pesticides. 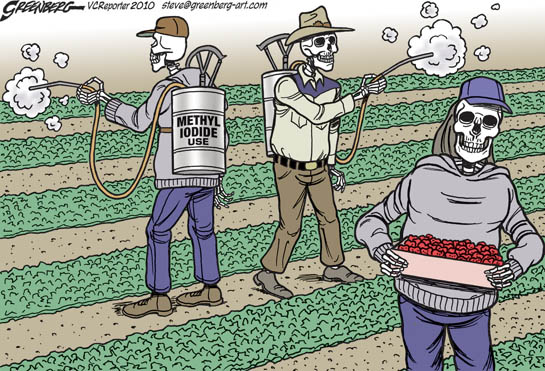 In many cases, symptoms of pesticide poisoning mimic symptoms of colds or the flu. Since pesticide-related illnesses appear similar or identical to other illnesses, pesticide poisonings are often misdiagnosed and under-reported. Immediate symptoms may not be severe enough to prompt an individual to seek medical attention, or a doctor might not even think to ask about pesticide exposure. Still, seek medical attention immediately if you think you may have been poisoned by pesticides.

Chronic health effects include cancer and other tumors; brain and nervous system damage; birth defects; infertility and other reproductive problems; and damage to the liver, kidneys, lungs and other body organs. Chronic effects may not appear for weeks, months or even years after exposure, making it difficult to link health impacts to pesticides.

Endocrine disruptors are chemicals that — often at extremely low doses — interfere with important bodily functions by mimicking or blocking hormones (the chemical messengers that circulate in blood and regulate many body processes including metabolism, brain development, the sleep cycle and stress response). Some pesticides act as endocrine disruptors and have been shown to cause serious harm to animals, including cancer, sterility and developmental problems. Similar impacts have been associated with human exposure to these chemicals.

Children are not simply “little adults.” Children are more vulnerable to pesticide exposure because their organs, nervous systems and immune systems are still developing. Children are also less able to detoxify and excrete pesticides. Exposure during certain early development periods can cause permanent damage.

Organophosphates & Carbamates: These pesticides are like nerve gas: they attack the brain and nervous system, interfering with nerve signal transmission. Symptoms include headaches, nausea, dizziness, vomiting, chest pain, diarrhea, muscle pain and confusion. In severe poisoning incidents, symptoms can include convulsions, difficulty breathing, involuntary urination, coma and death. Acute poisoning of the nervous system by these pesticides affects hundreds of thousands of people around the world each year.

Soil Fumigants: These pesticides are applied to soil, forming a gas that is toxic to nematodes, fungi, bacteria, insects, and plants in the soil. Because they are gases, they move from the soil into the air and expose people living or working nearby. Commonly used soil fumigants in California include 1,3-dichloropropene, chlorpicrin, metam sodium, and metam potassium. Symptoms of fumigant exposure include irritation of skin, eyes, and lungs (dichloropropene and chloropicrin), and extremely irritating to eyes and lungs (metam sodium and metam potassium). Dichloropropene, metam sodium, and metam potassium are all cancer causing chemicals and metam sodium causes reproductive harm. In counties where fumigant use is high, premature birth is more common than in counties with low fumigant use.

Pyrethroids: These insecticides are synthetic chemicals that are structurally similar to botanical compounds but have been designed to be more persistent. They are toxic to the nervous system, and there is concern that during pregnancy a fetus is not able to efficiently break down these chemicals. Symptoms of  pyrethroid poisoning include tremors, salivation, headache, fatigue, vomiting, stinging and itching skin, and involuntary twitching.

No products found
Use fewer filters or remove all